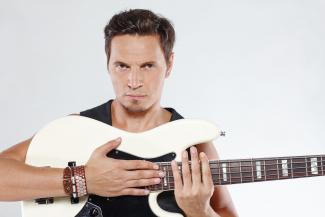 Alex Calancea is a producer, composer and bass guitarist from the Republic of Moldova.

After graduating from the Chisinau Conservatory he made his first tours as a bassist in Europe, Asia and Russia with a jazz fusion project. Then he took part in a pop rock project collaborating with prestigious producers in Los Angeles including Jack Jaseph Puig.

On his return from the USA to the Republic of Moldova, he created his own omonim band who became a reference project for quality music coming across the Prut. He payed tribute to the great artists of the „Golden Age” with the concerts “Amintire de iubire”, "Alex Calancea and friends" and produced the documentary “Bucurie de Noroc la Orizont de Plai”.

At this stage, he was inspired by the authentic folklore of the Republic of Moldova and had numerous successful collaborations with the Lautarii Orchestra, the Advahov Brothers Orchestra, but with also the Romanian Symphony Orchestras.

His first original album was released in 2016, dedicated to his bass guitar instrument, called "Capricious Bass". The album is inspired by the places where he grew up, the songs having funk, folk, classical and jazz influences. In parallel, he created the pop-rock project "RUPT", also becoming the producer of several Bessarabian artists. At the end of 2017, his latest project was born, "Alex Calancea și Lupii", a project that brings to the fore the motives, ballads and stories of outlawry, on contemporary rhythms fused with folklore.