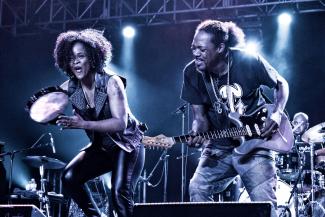 Eric Gales, born in Memphis, Tennessee, is one of the most talented American blues-rock guitarists. Hailed as a child prodigy, Eric Gales picked up the guitar at age four and at 16 he released his first album, The Eric Gales Band, with his brother Eugene and drummer Huwbert Crawford.

Being right-handed, he learned to play from his older brothers, who were left-handed, and from here the explanation of the unusual way he holds the guitar, left and upside down. He's called 'The God Gifted Guitarist'. In 1991, readers of Guitar World magazine named him Best New Talent. In 2019 Gales won the world's best Blues-Rock Artist in 2019 at the Blues Music Award.