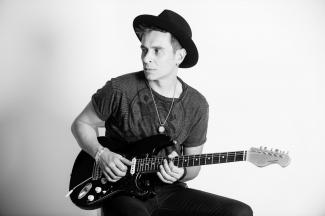 Florin Giuglea began his musical career with blues-rock. He joined Mike Godoroja in his band The Blue Spirit in 2003, toruing and recording an album. In 2006 Florin was invited to join the band of the well-known soprano Felicia Filip. Two years of touring with a world-renowned artist have taught him a great deal about superlative music and entertainment business. In 2008 he became a founding member of the band Publika with which he released the first album in 2009, one year later being nominated for Best Rock Act at the Romanian Music Awards. The record company re-released their album in a multimedia package in 2010 due to their success.

In 2011 Florin became the official endorser of Cornford Amplification, being accepted into an elitist club of guitarists who own and use live some of the most appreciated and requested guitar amps in the world. In 2012, after years of courses, workshops and stage experience, Florin founded FLO Custom Guitars, thus becoming a lute player and electric guitars builder. Obviously, in concerts or recordings he only uses guitars that he has built himself.

In 2015 Florin decided to make a change in his music career, returning to his first love: the blues. He re-formed StoryTellers, the acoustic blues duet with Marcian Petrescu, and released an acoustic blues album in 2007.

The right time has come. In 2015 Florin Giuglea started his long-awaited solo project by recording his debut album 'Invitation to the Blues' with his old stage colleagues and friends Adrian Ciuplea, Hanes Radu, Mihai Ardelean and a few other talented musicians. The album was mixed and mastered in the USA to further impregnate it with the scent of the sound of quality American music.

'Invitation to the Blues' is the result of years of stage, study and breathing music. Moreover, it is Florin's well-documented and researched project, traveling thousands of miles to the USA. From Beale Street in Memphis, Tennessee, to 6th Street in Austin, Texas, then Bourbon Street in New Orleans, Louisiana, in the renowned honky-tonk bars in Nashville and beyond in Tupelo and Clarksdale, Mississippi, through the classic concert halls in New York or Los Angeles, etc. Florin did all this in search of the true voice of blues music. Meeting authentic blues musicians. And now Florin Giuglea brings the magic of blues to Europe in the country where he was born, along with a piece of his soul: 'Invitation to the Blues'.