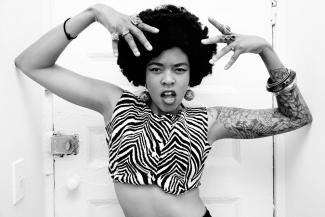 Nikki Hill is sweet seduction, sweeter threat, and smoldering energy. An original force in American music, she is tender and tough, flamboyant, witty and dangerous. To put it plainly, Hill brings daggers back to the stage and studio. Overlapping soulful, sensual and bold vocal tones with powerful chrome-plated riffs and swagger, her voice finds a home in it - a soul singing, bar rocking, roots
revivalist, that writes with frank self-reflection at a dancing tempo.

Hailing from Durham, North Carolina, Nikki Hill enjoyed R&B, soul, pop and hip hop at home. In addition, she sang gospel in the church choir from childhood through her early teenage years. Gradually, she developed her ears for garage rock, rock n' roll, blues and roots, while also picking up influence from living along the legendary Mississippi River - in St. Louis, Missouri, New
Orleans, Louisiana, and currently Memphis, Tennessee. In Nikki’s mind, a fertile mix of all the different types of music she had heard arose, and gradually these merged into something quite special, as she found her own voice, which the world was gradually introduced to on her many constant tours, where she took more and more audiences by storm with her distinctive vocals and
energetic stage performance.

After self-releasing and producing her debut album, Here’s Nikki Hill, her musical contributions continued, with her song “Struttin’” released on Deke Dickerson and The Bo-Keys Soul Meets Country EP, produced by Scott Bomar in Memphis, TN. The momentum continued through the release of her second album, Heavy Hearts Hard Fists, recorded at Fort Horton Studios in Wyldwood, TX. The acclaimed album was accompanied by a worldwide tour in the US, Europe, Australia, India and Morocco, and over 30 festivals, including Montreux Jazz Festival, Monterey Jazz Festival, and Byron
Bay Blues Festival, receiving praise for uplifting the new songs with an erupting live performance.

“Think Tina Turner fronting AC/DC and you’ll have half of the picture. She’s a machine…you’ve got no excuse if you miss seeing her… Nikki Hill is a revelation, her band masters of rocket-fueled bluesy swing, her voice the beacon which calls you home… a vocal powerhouse who don’t mess around.”
(Rolling Stone). Hill’s current touring band is Matt Hill (guitar), Laura Chavez (guitar), Nick Gaitan (bass), and Marty Dodson (drums).
On Nikki Hill's third self-produced and self-released album, Feline Roots, she lets her soul rip. Nikki and her band take a muscular groove — celebrating and wailing over love, transgressions, the hard times, and wild freedom — and inject it with timeless effect, giving Nikki a foundation on which to
build.

It's her version of rock n' roll that can only come from her stories. Nikki Hill has never been afraid to take the road less traveled, and it's clear with "Feline Roots" that she's living every word.